1. Share a winter memory from your childhood.
Ha! I grew up in South Florida so “winter” lasted about a week when we saw – MAYBE – temps in the 50s. The only thing close to a winter memory I have is when we visited my grandparents in Southern Alabama in mid-December and it was colder than I can ever remember. Our Florida coats weren’t enough but they had a cozy fireplace and I we huddled around it. I was not equipped to deal with the cold!

2. What was on your blog this time last year? (Besides the Hodgepodge of course!) If you weren’t blogging, what in the world were you doing with all that free time?
Here’s a link to my post last year on the 27th. It was a Tuesday. Looks like we were doing a lot of the same stuff: soccer, s’mores in the fire pit, hiking.

https://incognitusscriptor.com/2015/01/27/random-tuesday-baby-snot-on-going-sports-need-to-get-away/
3. Ellen Goodman is quoted as saying, ‘We spend January 1 walking through our lives, room by room, drawing up a list of work to be done, cracks to be patched. Maybe this year, to balance the list, we ought to walk through the rooms of our lives…not looking for flaws, but for potential.’

Do you see more flaws or more potential in your life at the start of a new year? Have you done anything specific this month to address either one? Does the new year truly begin for you on January 1, or is there some other month of the year that feels like a fresh start and new beginning?

Oh, I see a bit of both; I always have potential to improve and that is grown out of the acknowledgement of flaws. I have made a few changes around the house and this makes me feel like I too can be better. I don’t feel like the year has really taken off until at least February. I think now, as it ends, I am finally settled in to 2016.

4. Who’s an athlete you admire or respect and why?

Ooh, love this question. J.J. Watt of the Houston Texans for sure. His work ethic is absolutely ridiculous. He’s always the first one to practice and the last to leave. He goes to bed early! He recounted the first time he lifted one of those big-ass tires and he could do it just once. Now he can do it upwards of 60 times – because he busted his ass to get better. He has just done a lot of things that I think are admirable and he has good family values. He’s also pretty hot but you know, that’s not the issue at hand. 😉

5. Do you like cream in your coffee? Whipped cream on your pumpkin pie? Cream cheese on a bagel? Sour cream on a baked potato? Cream of wheat for breakfast? Have you ever had a scone with clotted cream? Of all the creamy foods mentioned, which one sounds most appealing to you right this very minute?

All of the above! Though I don’t often indulge. I put fat free half and half in my coffee at home. We buy reduced fat sour cream, cream cheese. I honestly haven’t had cream of wheat in years. Had clotted cream on a scone on my flight to London once. The most appealing right now? Coffee. I have some but I always want more. 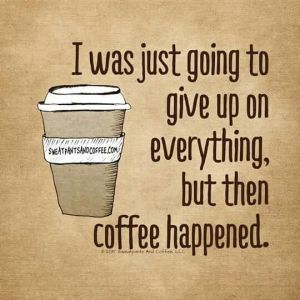 6. Where were you last kept waiting for ‘hours on end’? Or for what felt like hours on end? How well did you cope?

Hmm, I guess maybe during one of Ash’s races? Every April he and his brother run this one out in the Torreya national park but Ash has gotten injured a few times and we were there way loner than it should have taken him because he ended up walking, which means he was basically hiking because it’s that kind of terrain.

7. Believe it or not, when next week’s Hodgepodge rolls around it will be February.Huh?!? Bid adieu here to January in seven words or less.

(Also, I hate that song but my kids sing it constantly.)

We had a really good evening yesterday. We all ended up going to the local high school track and both Ash and I ran while the kids played with a football in the field inside the track. We then sojourned to Momo’s for pizza and beer. We sat outside and it was just the right temperature and everyone was good. And happy. After the kids got in bed, As and I watched the new Vacation movie. I’m of the right age to have grown up with the original Chevy Chase movies and they were some of my favorites. I was a little worried that this movie would go over the top like so many comedies tend to do these days. And it did. but it was also fairly amusing. I don’t regret it!

5 thoughts on “Wednesday Hodgepodge – Memories, looking up, looking back, and cream?”