Well, back in the office today even though I do not feel 100%. The cough has lodged itself firmly in my throat and it feels gross and annoying. Ash has had it for two weeks now and though the doc said he probably has bronchitis, he also did not give him antibiotics, because he didn’t think there was a good chance they’d even work. Sigh. I hope that’s not the fate I’m in for now: two weeks of a hacking cough and general malaise, but not sick enough to stay in bed. Yesterday, I didn’t feel that sick either. But I just didn’t feel right.

Today is bright and sunny and not as cold, which is nice. Yesterday looked and felt like fall, which was not entirely unpleasant. I can handle a gray day like that now and then. I would like to see a bit more fall color but that happens here around late November – sometimes. Depends on the tree itself. Generally speaking, Florida is green most of the year. I’ve been reading this book called Bitten: My Unexpected Love Affair with Florida and it’s so good. It’s exactly what I want out of a book about my state: he discusses various phenomena and flora and fauna and it ISN’T political. The Groff book I mentioned the other day, in one small snippet, managed to alienate me. The chapter I just read about heat – and how oppressive Florida heat can be – reminded me how little it seems to bother me. I hate being cold, rather. It also brought up the idea of cracker houses and how they were built to cool down or at least, facilitate living in hot climates. Then I got started looking at pictures of them and stumbled upon someone’s awesome flickr page with lots of them. And then I realized I took a picture of an old cracker home once. It’s somewhere out between Quincy and Havana, north of here. 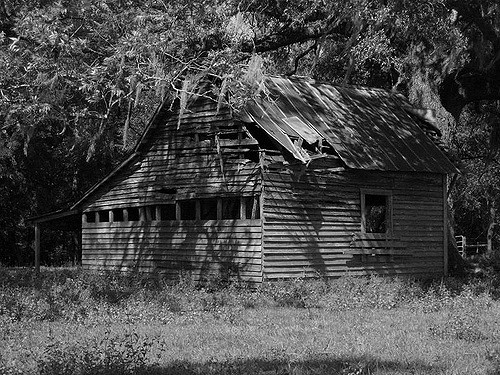 I crossed two things off my list today: contacting Verizon about International calling/texting/data and getting Todd set to be boarded. We go to Mexico next week and I may have mentioned that as it draws nearer, I am becoming increasingly nervous. I like visiting places, seeing interesting things, eating new foods. I HATE traveling. I hate airports and planes and how shitty I feel when I travel. I get nervous and begin thinking about my own mortality and how taking the entire family on a plane scares the crap out of me. Actually, traveling makes me hearken back to a time when I was more religious; I pray a lot when boarding planes, truth be told.

You know how, around this time of year, random kitschy catalogs show up at your house? I freaking love those. I have about 5 things in my cart from Lakeside collections and can’t wait to start my Christmas shopping early. I feel ten times better knowing I’m ahead.  I think this means I am getting old. 😉