SO, I could really stand to go right back to bed. Baby Girl has been sleeping through most nights but she woke around 1 last night, not that long after I’d gone to sleep. UGH. But anyway, we had a pretty good weekend in spite of her being under the weather.

I had plans Friday night but first, Ash and I had our date day. It was rainy so we had comfort food at Cracker Barrel then went and saw the new Robocop in IMAX. I have to say, it was better than I expected it to be. We did a quick grocery store trip before getting the kids. My plans were for dinner at 7:30 (a friend was in town for one night) and I met five other girl at Kiku, which is a new-ish sushi place that everyone seems to be talking about. I can see why: pretty good service, relaxed atmosphere, and some sick deals. I mean, we didn’t order until probably 8 but they had specials where if you ordered one of those larger sushi rolls then you got a six piece for free. Also, nigiri orders were BOGO. Domestics were 2 bucks as well All in all, a great meal.

Originally, it was not my plan to go dancing with them after. Courtney had to get up early the next day so she and I decided to beg off. But then we decided just one hour would be fine. Well, we left Kiku around 9:30, went to this bar called Krewe de Gras, had a shot, then went to Tap Room. We left there at 12;30. So much for plans! But we had a great time. I can’t lie. They had a cover band named Roctopus and they played all the fan favorites: Michael Jackson, Journey, Queen, etc. Danced to some booty music after then headed home.

Ell had his first baseball practice at 10:30 so we went to that. Only four out of ten kids were there but Coach Derek ran them like normal. I think he’s going to be a good coach; he knows his stuff and honestly cares if the kids learn it and have fun. One of Ell’s friends is on his team so that’ll be cool too. Looking forward to this season. Didn’t do much else that day; Ash went to a friend’s house and I took the kids – after nap – to get Ell some new cleats and to Target. The NFL combine started this weekend so we had that on constantly; I love watching that stuff.

The plan on Sunday was for Ash to run trails and then go play cards in the afternoon but a.) it rained almost all day and b.) Baby Girl was still ill and he started to feel not so hot. So we mostly cleaned and rested and we watched Back to the Future in the evening and then I pretty much fell asleep around 9. LOL. It was a good weekend though.

This week’s theme is songs that inspire you and since I am “trying” to finish this romance novel, here are some songs that always push me to write.

I am heavily influenced by Coutnry music, as my main hero has country roots and I wanted him to be sort of a good ol’ boy. He’ll do right by his woman. Also, I imagine he looks like this: 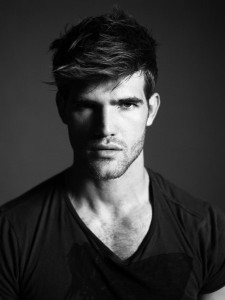 10 thoughts on “MMMM + The weekend that was”