I think I have reached that part of the holiday season where I am pretty much over it. We’re hanging out, watching football as usual on a Sunday, and I feel at a loss. I still need to finish unpacking and integrate new toys into the playroom. There’s only one load of laundry left to do but the house could use a decent cleaning. I’m off this week until Thursday and the younger kids can go back to daycare, but Elliot doesn’t go back until next Tuesday! These kids get way too much time off, if you ask me.

SO, our Christmas. We drove down to my parents’ house Sunday evening. We used to always drive at night when the kids were younger, hoping they’d sleep. I would say they usually did. Well, this was the first time Baby Girl traveled and um, she doesn’t much care for her car seat. She cried a lot and would only be quiet when held. Sigh. After that four hours, we arrived around 10 PM and even though I was hoping the kids would be sleepy and go right to bed, they didn’t. We ate some food and visited a bit before heading to bed.

Monday morning, Ash and Ell went to the mall to do some last minute shopping. They were gone quite a while before I got a phone call. Apparently, Ash misplaced his car. He honestly thought it was stolen but when my dad and I drove up there and looked for it, it was exactly where he described himself as having parked. I’ll forgive him because it’s a large mall and one he has been to maybe three times in ten years. But still.

We went to go to the store about thirty minutes after we’d gotten home from saving Ash’s ass at the mall and their car wouldn’t start. My dad was livid, since he’d been to the shop not two weeks earlier and they said his battery was fine. When AAA came out, it turned out to have two dead cells. Ash didn’t have to run so we all drank and ate chips and salsa on the patio, since the weather was nice, while my dad chewed out some Sears employees. 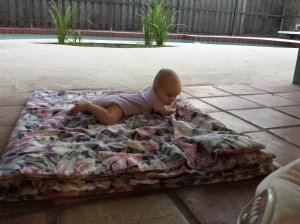 On Christmas eve, we went to Bob Evans for breakfast – one of my favorite places – and my mother and I shopped for Christmas day meal and we wrapped presents while the kids napped. We walked the neighborhood in the afternoon and had lasagna for dinner. After that, my dad built a fire, even though it wasn’t all that cold. To be honest, Christmas eve morning and Christmas day morning were the coldest times that Orlando saw. 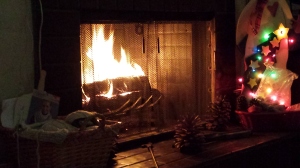 Christmas morning came early for the boys: 5:15. We sent them back to sleep but they were up by 6:30 We’d previously told my sister that the boys wouldn’t wait for them but she and her boyfriend actually showed up before 7:30 AM. It was fairly amazing, given their usual inability to be on time. It was impressive! The boys got that glazed look in their eyes by 9 so we took a break and had french toast and bacon. After all the gifts were opened and mom and I’d started on dinner and the boys were busy playing outside with Justin, the day sort of spiraled out of control. Elliot was being a punk and the day seemed to last forever. People felt stressed but I am not entirely sure why. All I know is that when the kids went to sleep and my sister and Justin left around 9, I passed right out on the couch. EXHAUSTED.

The next morning, my sister came back early so she could go with us down to Palm Beach. My grandmother is 89 and on her last leg so we figured we’d better take The Littles down to see her. We knew it was going to be a long day; three hours down, spending about four hours there, then three hours back in one day. But I know my g-ma appreciated seeing her.

I have always said that three days is my limit with family and that fourth day did us in. We got up Friday morning, had breakfast, then got on the road. More driving kind of sucked but we knew we were almost home. I can tell you that each and every one of us was thrilled to be back in our own beds. Baby girl slept the entire night on Friday! As in, 7:30 to almost 6.

I am thankful for family and that we were able to go down and see them. But I am also glad to be home and appreciating my new gifts. I got an excellent travel mug and a bunch of soaps and things of that sort. I also got a Kindle paperwhite, which is awesome. I honestly don’t want a tablet but I want to read. I am listening to the kids play with their new toys and now, all of a sudden, my backspace key is taking me back a page instead of one character. Ugh. It is always something. Anyway, onto the music!

Ok so New Years songs or songs about time. I can do this.

This one kills me!

And another oldie but goodie:

9 thoughts on “MMMM + Where have I been the last week?”