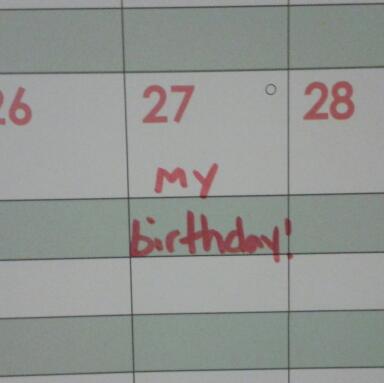 Link up with Stacy for more Wordless fun!

I am kind of superstitious about full moons; I have mentioned this before. When I looked at the calendar this morning, I was a little distraught to see that today is indeed a full moon. I was riding high on that little thrill I get when it is my birthday. I’m not big on birthdays but I do feel just a little better when it’s my special day. So I took the kids to school, all was going well, and then headed to Starbucks for my free birthday drink. If you have the rewards card, you get any drink, any size on your birthday! I was elated to say the least. I was leaving that parking lot and as always, I have to make a left, but there’s a wide middle area wherein cars typically make their left into the two turn lanes or one straight lane. Well the guy in front of me pulls into said area… and stops, leaving me in the way of oncoming traffic. I thought he would move, but no. He just sat there, even though he could have pulled into any one of the lanes to the left.

I take a look around – no one coming to my left – and in front of me: he’s driving a new Tesla. i.e. he has too much money. Well, I put my car in reverse and squeeze between him and the concrete median, seeing that the light is green and skidding tires a bit to pick up speed and hopefully make said light. I make it through and slow down at the next one, only to see in my rear view mirror a police car! He wasn’t running his lights but he was typing on his hardcore cop laptop. It was then that it occurred to me that even though it may be my birthday, the full moon doesn’t omit anyone and he could very well have been running my tag. Still no lights, he tailed me for two miles then got into the rigthhand lane and I breathed a small sigh of relief. I breathed an even larger one when I turned left to take Elliot to school and he continued on down Thomasville road.