1. What pets did you have while growing up? Tell us a little something about them.

None, really. I mean, not until I was 13. I found a box turtle in the yard once and got to keep him for about 2 weeks before we took him to a local pond and let him go.

We got our first dog, a beagle named Barney when I was a teen so I really only lived with him for about 4-5 years before I went to college and in the end, he lived to be 18!

2. What is one thing you absolutely must accomplish today?

It’s a boring answer but grading papers. My online students have crafted a writing plan for their analytical essays and I have to get those done. I have until Sunday but I attempt to get those done before the weekend.

3. Where were you ten years ago? What were you doing there?

Here! I’ve been in Tallahassee since ’97. At 28, though, I had been at FSU as an employee only about a year and I had just had my first child. So I was on maternity leave at this time, ten years ago.

4. September 26th is National Dumpling Day. Did you celebrate? Apple dumpling, xiaolongbao (steamed Chinese dumpling), chicken and dumplings, pirogi, matzoh balls, or gnocchi…which dumpling on this list would be your dumpling of choice? Have you ever made homemade dumplings of any kind?

If y’all don’t know, I’m from the South so chicken and dumplings are where it’s at! My Mema always made them at Thanksgiving and a couple years ago, my mom and I tried to recreate but they were a lot of work and not as good as my grandma’s!

So which kind are you?

LOL is it awful to say I sometimes DON’T want anything adventurous? I guess I do want to find something fun and excited but there are definitely moments where I hope things are more smooth than that.

6. Insert your own random thought here.

Since it is getting to be fall soon – i.e. it won’t be 90 degrees in North Florida, only 80s – I am starting to think about decorating. But I bemoan the fact that Autumn decor doesn’t make me feel the same as it once did. I do sure still like the overall aesthetic. It is my favorite season by far. But I used to just LOVE getting out my little leaf shaped dishes and putting gourds around. I took great pride in my Halloween decorations too; the little cemetery set up in the yard and the small effects that added to a fun little arrangement.

It isn’t a chore, per se, but again, it doesn’t bring me the same feeling of joy it once did. I don’t know how to get that back, really. But it reminds me to try and find the happiness in small things.

(For fun, here are some older photos of my stuff.) 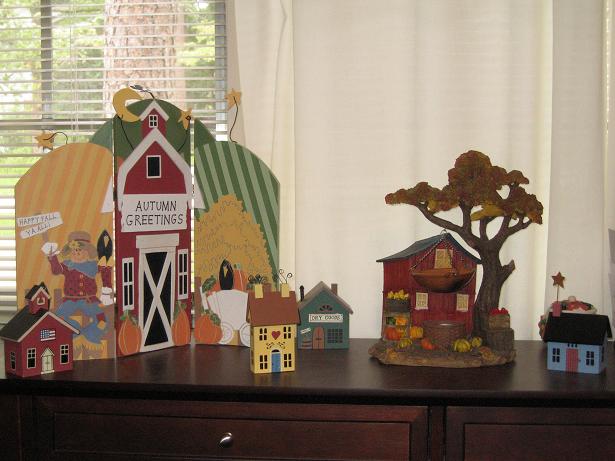