1. What’s something fun you’re looking forward to on your May calendar?
Hmm, well, we just kicked off the month with the most fun thing – the Def Leppard concert – but if I had to pick another, it would be our annual beach trip with friends. We always meet up with five or six other families and spend the day down at St. George Island. Though we went to the beach this past weekend, the kids have a lot more fun when everyone is there.

2. What are some images that come to mind when you hear the word mother?

Ha ha oddly enough, the song Mother by Danzig comes to mind first. But since that’s dark and ominous, let’s think of some others. That word makes me think of stability and comfort.

3. What’s something beautiful you own or have seen that’s made of glass?

Ash’s mom used to make cut glass items and here are a few of hers: the lamp and the globe: 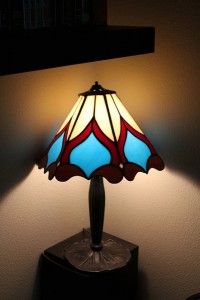 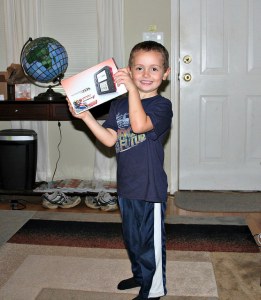 (Obviously the globe is behind Isaac.)

I love these items because I know she put a lot of effort in.

If I had to pick pretty glass items not endeared to me, I’d say anything by Dale Chihuly, who is known for blown glass.

4. Was today typical? If not what made it unusual?
Yes, it was indeed a typical mid-week morning. However, it felt weird because this was the first day any of us have been to our weekly obligations. We got back into town tomorrow around noon so it feels like a Monday.
5. What is a quality you wish you could have more of?
I can’t think of a word to describe it but I wish I possessed the ability to catch myself when I am falling into old habits like yelling at the kids or being exasperated by them. I think about it when I am alone and sad about it but can’t seem to stop myself in the moment.
6. What’s the next major purchase you need to make? Will it happen in the month of May?
Well Ash just bought a new TV (ours is still relatively new but has huge lines on it because the internal boards went bad.) but I think the only thing I even NEED to buy will be some stuff from Lush. I can’t think of any major purchases coming up. I have to pay for summer camp and that’s expensive enough!
7. What responsibility/job/work did you dislike while growing up but has proved helpful to you as an adult?
I never really liked helping my dad with yardwork but what it did was show me that you sometimes have to do crap jobs. I feel like I took that with me and now I can power through things and I always work before I play. So there’s that.
8. Insert your own random thought here.
Oh man, y’all, I had a great time in Pensacola! In fact, I think even my husband managed to withstand my mother. LOL. We got there about 10 AM Sunday. The kids hung out with my parents, we ate lunch, and then figured out what we needed to do. Which was really nothing. So my dad took all the kids to the playground and over to their friends’ house. My mom, Ash, and I went to check out the Bay Center so we had an idea of what Monday would be like. We decided to try the new Gulf Coast Brewery so that was cool. Then we went downtown to the Pensacola Bay Brewery (where we’d been before) and had drinks there. Pensacola is the drinkinest town, I swear it. Lots of younger folks too. It’s kind of a nice vibe.
We were going to make dinner Sunday but ended up at Mexican instead. Then Monday, my mom had to work and though I planned to go to the beach, it was rather cloudy. We went anyway and I enjoyed it, though the kids did whine a little. In the afternoon, everyone napped. It was actually a really nice break. I mean, I only just finished up the semester so it was nice to get away.
Around 5, my dad dropped us off downtown at a place called Hopjacks. I had an amazing roast beef sandwich and Ash had pizza. The place has 112 taps! It was awesome. I honestly didn’t even drink that much but it was still a fun stop before we walked the couple blocks to the concert.
We stood in the merch line first and then took our seats, which were ridiculously close. I will say, I thought the demographic would be a lot like my age group (35-40) but most folks were 40s and older. I guess it makes sense; when I was first listening to Lep, I was in my single digits. These folks were in their teens and twenties; it makes sense.
Anyway, Styx opened and though I’m not a huge fan, they sounded amazing! I mean, I have seen bands live and thought, these guys clearly have no talent. But this band… wow. Just sounded great!
Finally, Def Lepaprd came on and they too sounded amazing! I was in awe of how great it was to be in that situation: just up close and it was loud but not too loud. It was definitely not Ash’s scene; he’d rather listen at home. But I was ecstatic to finally see one of my favorite bands. I feel like I’m not articulating this very well but let’s suffice to say: I am glad we decided to go.
Afterward, we walked back to Hopjacks and ordered an Uber. Admittedly, never used one before but it worked out well. Might have been a little expensive but it was a peak time and we didn’t have to wait forever for a cab. We were home by 12 and I was flat out exhausted!
We drove back yesterday and were in town by noon. I pretty much spent it catching up on laundry, cleaning, running, and relaxing. Though I did have to check into work stuff for a bit. But it was a great trip! Below are some pics I took.

5 thoughts on “Wednesday Hodgepodge – I have returned”