This is rather general so I am actually going to pinpoint the last time I said, “This makes my day.” It was Sunday and the kids wanted bagels from Brueggers. We used to get them all the time but then we changed our morning eating habits. Anyway, I went early and when I walked in, ordered my usual – six bagel bundle, all cinnamon raisin except the one that I choose. I usually get poppyseed or everything but lo, there in the corner was the seasonal special: egg bagels. They used to carry them all the time but some sensitive loser sued them and they had to take them away from their everyday lineup. Oh was I ever happy to have my favorite bagel back!

2. Lots of these kinds of lists out there, but one found here says the fifteen most colorful places on earth are:

Of those listed which would you most like to see up close and in person? Of all the places you’ve seen or traveled in your own life, what would you say was one of the most colorful?

I’m going to say any of the Italy places. I studied a lot of Humanities in school and for a time, felt like I didn’t need to visit there; I’d seen it all in photos. But chances are I’d like it even more than I thought. And of course my answer for most colorful would have to be Hawaii. You can go from beaches to lava flows to lush jungles in roughly an hour. Pretty amazing!
3.“Everything you want is on the other side of fear.” Jack Canfield  In general, would you agree or disagree with that statement? Why?

I definitely agree because I think fear is the main thing that stops us from pursuing something we want. Sure, we can say it is time or money but that’s trivial when you really think about it. Fear halts our thought process; paralyzes us from grabbing the bull by the horns. I can’t say I’m the most fearless person but I try to stare my problems in the face and see past it.

4. Imagine you’re stranded on a desert island and dessert appears…what do you hope it is? Do you ever struggle to remember which spelling is desert and which is dessert?

Admittedly, even as an English person, I do sometimes forget. And if I had to pick a dessert, I would hope it was a gigantic slice of cake with decadent frosting. 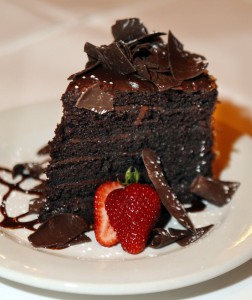 Kenny Rogers – Buy me a rose. Every single time.


6. January is National Soup Month.  Everything from soup to nuts, in the soup,  thick as pea soup, souped up…which saying most recently applies to your life in some way? Explain.

I’ll go with “in the soup” because my life is jam-packed with all kinds of random stuff right now and I sometimes feel like I’m drowning. I wouldn’t say I’m necessarily in a bad situation but always teetering on things falling apart. And in the in-between times, I cram it fuller with my little things like Sherlock, music, writing, and books. I’m pretty busy!

7. Write a two word note to your younger self. What does it say?

Not that I didn’t take chances or risks but I did let a lot of fear stop me.

So today started off with a wonderful diaper blow-out. Dakota hasn’t had one in a long time but there it was. I’m talking, she needed a bath and everything had to be washed. And the laundry needing to be put in the dryer is what made us leave ten minutes late. Then, I got to work and realized my master key had fallen off my keychain. Luckily, it was back by my car on the ground. I am behind on grading so I went into my online class website and it was down! The good thing is that I think that might be the worst and it’ll improve from here. At least, here’s hoping!

4 thoughts on “Wednesday Hodgepodge – Eke out time to blog”