1. It’s October so let’s get this out there first thing…have you jumped on the all-things-pumpkin bandwagon? How so?

I have had a couple cookies someone baked and then two or three PSLs but for the most part, I have not. I will say, I was craving pumpkin pie the other night and went on a mad pinning spree of all kinds of pumpkin-y images. 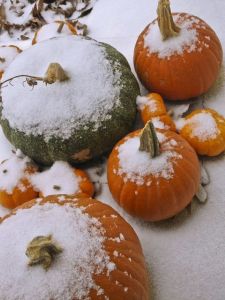 2.  “We have more power than will; and it is often by way of excuse to ourselves that we fancy things are impossible.” Francois Duc De la Rochefoucauld

What’s something you once thought impossible, but in hindsight see as more a matter of lack of will?

I will say that I thought – and do think – that losing weight down to a certain number is impossible. But really, I don’t have the will to go so hardcore on my eating that I get there. I do ok eating relatively healthy and working out. I just don’t want to cut myself off THAT much.

3. The rose is America’s National Flower, but every state also has its own (click here to see the list). Are you happy with yours? If you were in charge what would you declare your state’s flower? If you’re outside the U.S. what bloom would you like to see labeled as your country’s national flower?

I have always liked the orange blossom and think it’s great for Florida! Just call us orange groves.com. I always thought it would be cool to get it as a tattoo; I’m fairly loyal to this state.

4. What have you lost interest in recently?

Oh man, I have to say Country music. I was going strong there for a while but I just can’t seem to care anymore. I get sort of irritated when a genre gets a lot of criticism and it definitely has come under fire. There’s the Blake and Miranda split and the argument about “Bro country”. I just don’t want to be in it right now.

5. In your opinion, who’s the best living musician?

This is tough! My first thought was Sinatra but he’s dead. My second thought was Stevie Nicks, because I love the White Witch. But I think I’m going to go with… either James Taylor or Billy Joel. Great songwriters!

Every winter, we inevitably make them one or two times in our firepit outside. I like toasted marshmallows but I think S’mores are a little too big and bulky for my taste. The kids like the entire process though so we continue the tradition.

I have a very short Autumn bucket list. It includes: getting a few decor items at Michaels, go to the pumpkin patch, photograph leaves as they turn.

7. Your favorite small town? Why?

When I was younger, we traveled west from Newark, NJ to a little place called Salamanca, close to Buffalo, NY. Along that route, we saw many small towns and I have vivid memories of cute front porches decorated with Indian corn, pumpkins, and brooms. I cannot think of any names of these towns; sometimes I look on google maps and guess at some of them. So for this answer, I’m going to pick Havana, FL. Because it’s adorable.

First pic is mine. Second, credits go to David.

So this might be TMI but this coming Monday, I’m going in for my first time waxing. My friend recommended it and the only reason I’m going through with it is because of our vacation. I can’t see myself doing it often; I’m not interested in baring myself to a stranger and partaking in relative discomfort often. but Courtney swears by it. We shall see. I’m not the vain type so I highly doubt this will become a trend. The only “vain” or selfish thing I do is get a pedicure about once a month. I’ll report back next week.