1. Are the leaves turning color where you live? Have they begun to fall? Will you have to rake when it’s all said and done? Is that a chore you love or loathe?

They are, but they will get better all through October. We took a walk last week and here is what they looked like by a pond we pass: 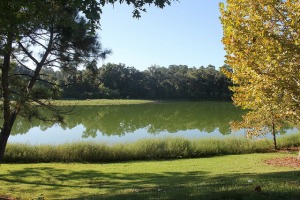 I used to hate raking! A few years ago we cut down most of the trees in the front yard (mostly because they were Sweetgums and dropped these horrible spiky balls of DOOM) so now, we don’t get too many leaves. There’s one tree in the front that does shed but we left it and I am glad. We rake them up and let the kids play. 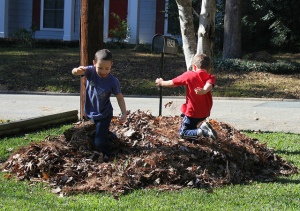 I have only ever felt really shaky once, and that was when I recited my vows to Ash at our wedding (nearly nine years ago). But I think within the last year or so I got shaky when I had to get on a class about being slackers. I get nervous when I have to ream them a new one.

3. After 20 seasons with the NY Yankees, Derek Jeter played his last official game Sunday afternoon.  Jeter has been described even by opponents as a class act, both on and off the field. The NFL is back in action this month too, with several players in that sport also making headlines. What are your thoughts on athletes as role models? Should a professional athlete be expected to act as role model or is that going beyond their job description? What responsibility do the organizations these athletes work for have when it comes to dealing with off the field behavior? Discuss.

I do wish that children did not look up to these guys as role models or heroes but the truth of it is: they don’t see the bad stuff most of the time. Nor do they see anything but what they do on the field/diamond/court, etc. I know at least for my boys (who don’t really idolize any players, but have friends who do) they are thinking about how great those guys play a sport they love.

However, I think it is these guys’ responsibility to behave themselves, not because they’re in the public eye necessarily but to me, they are being paid millions of dollars; the least they can do is act reasonably well. At least like a responsible adult. I am not one to begrudge them a good time but don’t beat your kids beyond what will make an impact and don’t knock out your wives/girlfriends. To me, it seems pretty cut and dry, and maybe that is very narrow minded of me, but that is how I feel.

4. What season of the year is toughest for you in terms of your health? Why?

I typically have a lot of issues in early Spring. When it starts to warm up and the rain sets in, all the mold and spores and junk just kill my respiratory system. But I still love the newness of Spring!

5. The top six healthy food trends of 2014 according to Eating Well are-

clean eating (more veg, less meat, less sodium, limit alcohol and processed foods)
trash fish(you know those fish that are caught in fishermen nets and thrown back? It seems chefs are finding creative ways to make them more appetizing)
cauliflower (the new IT vegetable)
kaniwa-(essentially baby quinoa, so like quinoa only smaller)
fermentation (think pickling only with twists on flavor we’re not accustomed to)
community supported farming-(farms operating with community support/membership)

Okay-so how many of the healthy food trends for 2014 have you experienced, encountered enjoyed? Any you’ve tried and said ewwww? Any on the list you’d like to try before year’s end?

I admittedly have been sort of bad about processed foods and beer. However, I love veggies and try to get them in. There’s a few community farms around here where you can basically rent farming space and people all tend to the land. I am really really considering joining. I could get the boys to help and we don’t have to set aside a place in our own yard.

I am all for trying to new things that will increase the value of my life so I’m game for these.

(throw a hand wave in there to say goodbye, I guess 🙂 )

7. What’s something on your October calendar that makes you happy just thinking about it?

Well, it would have been the Luke Bryan concert but we were unable to make that work. So in general, there isn’t anything, really, that is making me happy, other than just football games and my mom possibly coming up on the 17th. Ash’s office does a charity bowling even that is always pretty fun, it is happens right around our anniversary.

I got caught up writing yesterday and didn’t get nearly enough papers graded to stay on track. But at heart, I AM a writer and when it hits, I have to go with it. Sometimes forcing myself to work on existing pieces can be so painstaking but when the inspiration hits and my fingers fly all over the keyboard, magic happens. I mean, great things just appear and I am impressed with my own brain for producing such gold! I felt very productive, having complete about five or six entire pages of actual substance. But, today, I have got to force myself to grade papers. It’s going to be a loooong day.