SO, Friday evening, I decided we should go out to dinner, because who feels like cooking on a Friday night?? Not I. So we headed to Mexican and the kids were exceptionally well-behaved and I had a couple margaritas. All was right with the world. We browsed stuff at Lowes after and then after Isaac went to bed, I was sort of in and out of sleep while Elliot read books in his room and Ash was watching TV. It was nice and relaxing, to say the least.

Saturday morning was BUSY. I got up and ran my easy three miles then we puttered round until about 9:45. My plan was to leave around 10:30 to get to the football field by 11. However, I left way early, got money, and we found our parking lot super fast. I thought traffic would be worse but not as many people tailgate for noon games. I guess 9 AM IS too early to be hammered. Anyway, we made it in time to catch some of the other Guest Coaches stuff so we saw this nifty 3D highlight reel. Then we went down to the field for sideline warmups. 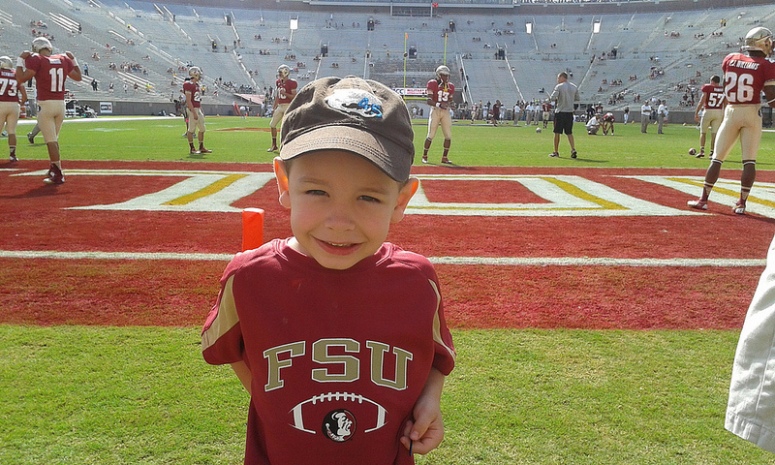 There’s Elliot while we were watching guys warm up, etc. It was pretty cool, I have to admit. We went to leave the field to take our seats but we sort of got trapped right by the tunnel because pregame stuff was starting. So we sang the National anthem on the field, watched the fly-over from the field, and then saw Chief Osceola and the players exit the tunnel not three feet form us. Probably the only time THAT will happen! 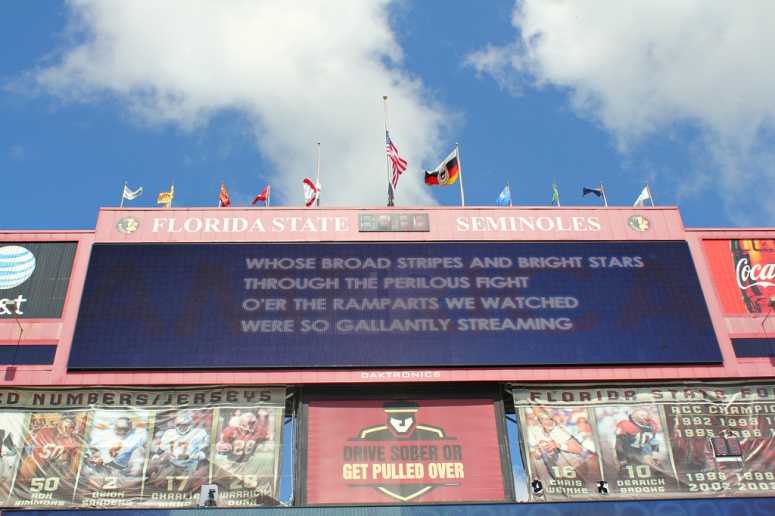 Our seats were good and Ell made it to halftime, which is what I expected out of him; he’s five after all. Besides, it was a total blow-out; a lot of people left then. I figured he’d fall asleep in the car but he was a trooper. We got home and when Isaac woke from his nap, we all went grocery shopping before Ash took Ell to a movie (because he got on purple [behavior chart wise at school] again). I made spaghetti in their absence and had it ready soon as they got home. I don’t remember what we did that night other than lay around. Oh, wait. While they were at the movie, I cleaned up my kitchen, which had been bugging the heck out of me. Ever since my surgery I have been behind on cleaning; like I lost all desire to keep up with housework. I was SO happy that got done!

I ran only six miles on Sunday (as per my new training plan) then cleaned some and got ready for football. And that’s pretty much what we did all afternoon. We had steaks and I mowed the front lawn later on. I won in my fantasy league so I am off to a good start this season.

I do have to admit: after last week, I felt like I was merely existing, not living. I was so busy with work that I was simply going through the motions. It’s getting clearer now and I am able to see, to live my life. I HATE when I get like that. I am over that hump now and have plans for happy things: going to pull out Fall/Halloween decorations tonight, my new phone camera lens should be here soon, and I have no grading this week! I do have student conferences but it’s a heck of a lot easier than 85 8 page papers about interpersonal communication. I am going to fully enjoy this week.

It’s a freebie week and I am having issues thinking of some good songs to play. I am so behind on new music, it’s ridiculous. All I know is Country and I pretty much always choose those. SO, let’s just pick some random stuff… randomly!

I can’t believe they had a video for this!

ELO- Can’t get it out of my head

I was really into my parents’ vinyl collection back in the day.