Since I’ve been thinking about it almost constantly for at least the last three weeks, I can’t really say how surprised I am that Elliot turned one today. I say “turned” because he popped out around 9:45 AM, if you recall. It’s been a long and short year, all at once. Just like time always is – you lose some, you feel like you’re catching up, you can’t wait, you wish you had it back. Sometimes, I remember how he lay in my arms and drank my milk, all happy and content. How he used to grab my thumb whle he ate, as an anchor or reminder that I was holding him. We spent so many good times together, he and I, just bonding, looking at each other, committing faces to memory. His seems to have changed so much

I can still see similarities but I know where it has changed.

With each new thing he learned, I had to catch up. I was always about a week behind him. Like when he was done eating every 2 hours or when he no longer wanted to sit in the papasan. When we was ready to move onto 9 month chunky foods, when he could be wearing shoes as he cruised around the house. As a first time mom, much of Elliot’s first year was a gigantic learning experience for me above all else.

There were some times during this year when I allowed myself to compare my child to others. This will make you insane. It is not healthy to think that your kid will do anything remotely similar at the same time as anyone else’s kid. My friend’s daughter, two weeks younger, did almost everything before Elliot, except get teeth. Elliot has eight and she only has two, still. Babies, I have learned, do things at their own pace. In Elliot’s case, he may have been a couple weeks behind the “norm” on such activities as sitting up, crawling, and walking but in time, he got the hang of all of them. In fact, once he gets it, he takes off and never looks back. That’s where we are with walking. The last two days, he’s been taking one step then two. He’s so close. I give him a week without the pretense of having to live up to his parents’ standards (Ash and I both walked very early.)

Before becoming a mom, I didn’t realize that at one, you begin calling a child a toddler. Toddler. I have a toddler! That’s a big “Holy crap!” moment for me. And he’s about to be toddling. And getting into trouble and starting to develop more of his little personality. He already has in some ways. He’ll let you know when he is tired. Or when you’re not entertaining enough. But he also likes to cuddle more now and he is beginning to show way more interest in daddy over mommy. Yet, he comes back to me when he’s feeling out of sorts.

I really do look forward to this second year. When I was younger, I dreaded change out of fear. Fear of the unknown. But these days, I embrace it. Not wholeheartedly but with a confidence that I can do it. That I can address the problems and work through them. I have my husband to help. I have my son as my cause. 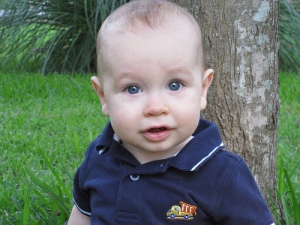