Strangely, I’m not feeling all that sad nor nostalgic about the end of the year. In fact, I feel nothing towards 2009. I’m not really excited… I suppose I just haven’t given “the end of the year” much thought. It could be that on Thursday night, half-way through Valkyrie, I began having awful chills and by then end of the movie, I was feeling like garbage. I took a bath, wherein I read the first two stories of The Tales of Beedle the Bard and then went  to bed in a fog. I stayed in said fog until early this morning when I was magically feeling like myself again. Though in the time I was ill, we drove home and carried on our normal weekend – but I was incapacitated on the couch for most of it.

However, I managed to do a lot when I was in Orlando. Aside from the wedding of my good friend, Chris, Ash and I saw the Orlando Magic blow out the Golden State Warriors (thought it was still really fun), I got to eat Hovan and Pollo Tropical, and it was nice to just sit sometimes and not worry about Elliot, because someone else in the house had an eye on him. The week was a frenzy of activity and by the end, I couldn’t believe a week had passed and yet, as we got onto to the Turnpike heading North, I suddenly felt like I had been away from home for a very long time.

I was also not necessarily looking forward to this week, since I am off but am in a limbo type place. My house is a mess (though I put away the tree and all other Christmas decorations yesterday), Elliot is totally off his schedule, and I am still feeling tired from my illness. But, I have intensely enjoyed each and every naptime and last night, after bedtime, I took a long luxurious bath, read the January Martha Stewart issue, and then I fell asleep in bed reading In a Sunburned Country, by Bill Bryson. This week? Is awesome.

And as I normally do – and in no way meaning to sound materialistic – I’ll list some of my Christmas gifts, for fun: various useful gift cards (Borders, Starbucks, Publix), some Victoria’s Secret PJs, Flexpod gripper tripod, thumb drive, accessories for my Snow Village, some various lotions and little stocking stuffers, and Ash got me a Coach purse. Every woman should have at least one nice handbag and I basically got to pick mine out. I was surprised, though, that he actually got it. I think he really wanted to buy me a nice camera or a laptop but is saving up to get it for my birthday. He keeps saying how I did better than him this year on preesents (a tough feat to achieve normally) and he may be right. I got him: Left 4 Dead, a device charging station, Mario PJ pants, a Transformers chess set, a calendar, and a scanner. All of these things he loves and has used already. He’s already scanned 300 pics, which was the point since all his family’s photos are in boxes taking up space in Elliot’s closet. I really got the scanner for me ;).

So, what did you get this year that totally rocks? And what was your favorite part of your holiday vacation? 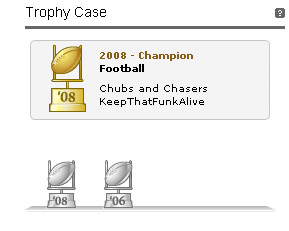 I won in Ash’s fantasy football  league and came in second in my other one. I am the champ!

2 thoughts on “Get back”