Before I can even think about anything intelligible to write, I first have to say, PEOPLE ARE ASSHOLES.

Ok, I am feeling better.

Hmm, Spackle seems to come off your hands with 3-4 rounds of lotion. Didn’t expect that. Anyway, where was I? Oh yeah, feeling better. I’ve just had a few instances today where people have been blatantly stupid and/or selfish enough to get in my way and ruffle my feathers just a scoatch. Hey, that word is in the urban dictionary! But not in the WORD dictionary.

So far, this entry is proving to be little more than a page in aa middle school girl’s diary; need to pick up the pace here.

Ash is in the throes of packing a sixteen foot U-haul in about two feet of snow in the frozen tundra of Northern Ohio. Soon, they’ll be on their way here and I’ll be one day closer to a.) help with the baby but b.) lacking in privacy of any kind. Maybe it’s silly to be upset about but really, once my brother-in-law is living in our home, I can no longer walk, half-clothed, to the laundry room for a shirt or a pair of pants. I cannot tiptoe from the guest bathroom (where the tub is) into our bedroom to change. And, my biggest complaint of all, I cannot just whip it out and feed the boy whenever I want, wherever I want. Sure, I could. Ash and his family were brought up not being embarrassed by those sorts of things. They don’t see boobs and giggle. Especially not when they are in the service of a small human, in a totally non-sexual way. But maybe it’s partly my issue; I have to lift my shirt and some of my residual baby fat would be exposed. And really, for as uncaring and NOT vain as I want to think I am, I am relatively repulsed and embarrassed by this flap of flab.

Maybe I shouldn’t worry about such inconsequential things. I should focus on good stuff while Big E will be here: another pair of hands to hold/burp/entertain the boy. He can also hold him up like this and model those fashionable baby jeans, which I still think are a riot. 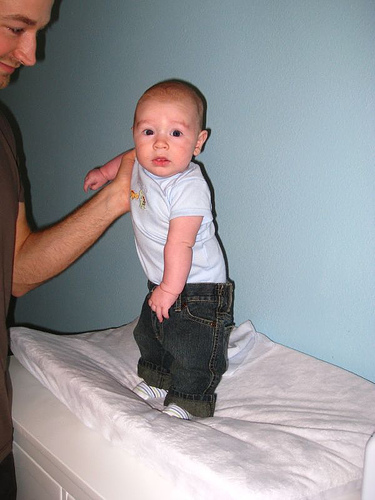 They fit him a whole lot better now that he’s 6 months old, so he doesn’t look all thuggin’. I somehow believe that when he’s entering his teenage years, that look will be out of style. But we’ll see. I’m hoping that the long, shaggy hair boys are wearing now (see: a few entries ago) is also gone. Of course, part of being a parent is allowing your kids to do what they want for themselves, even if they grow their hair out and look like a shaggy dog.

It warmed up nicely here so I am going to crack my window a tad and prepare for a student conference. Peace out like a girl scout.

One thought on “Actual substance”