LOL I guess I would say the 5k I ran a few weeks ago, but only because I hurt my knee. In terms of mentally taxing, that would be the tedious task of creating English courses for my job. It’s tedious and boring.

2. When did you last take a taxi somewhere and where was that somewhere?

Oh man, I can’t really remember. I guess in 2012 when we were in Chicago, we took one once, when my BIL didn’t want to move his car. Where I live, you only take a taxi if you’re really drunk!

3. What’s something you can do today that you couldn’t do a year ago?

Hmm, I cannot really think of anything here other than… drink more? Ha ha. I mean, a year ago I was still breastfeeding Dakota so I had to watch my intake but now, she’s fully on normal food and has a gazillion teeth. Crazy how quickly things can change!

4. How often is chicken (in some form or fashion) on your menu at home? Which of the following would you most like to see on your table tonight….a chicken salad sandwich, your mom’s fried chicken, a Chick-fil-A meal, Cracker Barrel’s chicken n’ dumplings, a roast chicken dinner with all the trimmings, or ‘hold the chicken, I’m a vegetarian’...?

I’d say I make something with chicken two or three times a week. I make great chicken tacos and Ash is keen on grilled chicken. If I had to pick something to eat tonight, hands down, Cracker Barrel’s chicken and dumplings. It’s the only thing I ever order there!

5. What was your favorite television program when you were a kid? What characters do you remember the most?

I don’t think I could pick just one. I used to love watching Full House (obvs I was not kid like 6-7) but some other faves were: Reading Rainbow, Alf, Golden Girls, Ghostbusters cartoon, and Saved by the Bell.

I haven’t worked on my bullet journal lately but this tribute to my grandmother was something I did a few months ago. My grandfather was so touched by it he printed the photo and framed it. 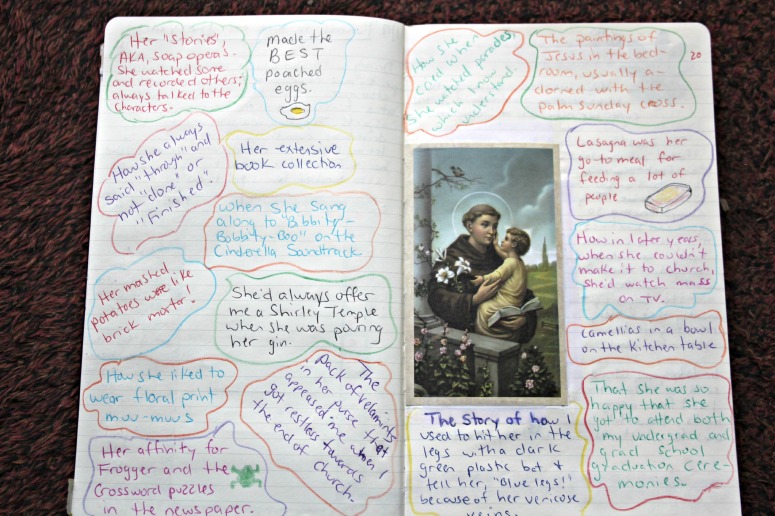 7. What frustrates you most about the Internet?

People who argue incessantly over things that don’t matter!!

I’m pretty sure the guy behind the pharmacy counter at Walgreens hit on me the other day. I was literally dying from allergies when I stumbled my way up there with my card for Zyrtec-D. I put my keys on the counter and he commented, “Those are some righteous keys”. Yes, I have about seven work keys and I hadn’t detached them from my car keys so it was a big mess. I stuttered out a “Thanks,  I guess.” And he said, “You must be the key master. Have you found your gate keeper?” I realized he was making a Ghostbusters reference and chuckled and we agreed I got what he meant. As I walked to my car I thought, was that a line he just sued on me? I think it was. These days, getting carded and even hit on by the nerdy pharmacy guy are little boons for someone my age and with as many kids as I have. LOL. Little things I never suspect.