1. It’s fall. Y’all. My favorite season of the year! What’s something you love to do this time of year that makes you feel it’s officially fall? And unrelated to that, do you ever say ‘y’all’?

Without being too cliche and saying going to the pumpkin patch – which I LOVE to do – I will say that I like putting out my Fall decorations. I have quite a few cute things that I add around the house. Here’s just one example:

Making my house FEEL like it is Fall makes me very happy.

2. When did you last have a falling out with someone? Has it been resolved?

There are a number of friends who have come and gone from a circle of people I know and if they have moved away, I have not spoken to them. It’s not necessarily intentional but we didn’t make any efforts to stay up with each other.

I really like this one, but there are so many more out there:

4. What’s something you’ve recently let ‘fall by the wayside’?

Sadly, reading! I got a newish book from one of my favorite authors and I read maybe 5 chapters before just running out of time. I think about it often but I just cannot make time in the evenings to get back to it.

5. When did you last attend an event, read a book, watch a movie, try a new recipe, or visit a shop-restaurant-tourist attraction that fell short of your expectations? In what way?

We saw “Lucy”, which was written/directed by the same guy who did “5th Element” and it was God-awful. That was a disappointment because “5th Element” is good.

6. Describe a time you said or thought, ‘The apple doesn’t fall far from the tree.”

Ha! I say this every time Elliot does something super similar to Ash, because he definitely demonstrates the most like behaviours.

7.  Was today better than yesterday? Why or why not?

So far, today is… less eventful than yesterday but everything has been kind of crappy for a few days now. For now, this day is going better but it ain’t over yet!

It’s about to get crazy busy; this coming Saturday begins 8 weeks of football games for both boys. Half of them are at the same time and the other half are back to back (8:30 and 9:30, for example). It’s going to be a long season and one made busier by a plethora of birthday parties but we’ll make it through. The one thing getting me by today is the fact that it’s cool out today. OK, cool for North Florida. Still only 70 and breezy at noon? That’s amazing, you guys. Another upside is the meds Todd needs for his glaucoma are half as much at Costco. Yay! If the bottle will last him roughly 3 months, it’s only going to cost me about 7.50 a month to medicate him. This is totally doable. Elderly dogs, man.

Todd, before his eyes got all milky looking: 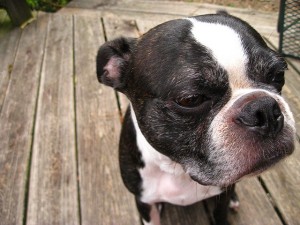